He was also awarded the highest media honorary title and honorary award of “Vishwa Keerthi Maadya Shoori Jana Prasaada” in honor of his service rendered to the country. He was also the youngest president in the history of the IAA (International Advertising Association) Sri Lanka Chapter. 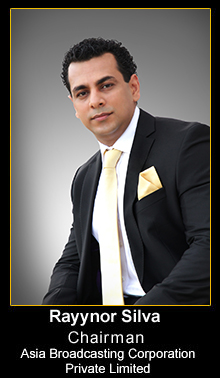 With the highest listenership ratings as per the leading International Ratings agency in Sri Lanka.

With more than 1200 staff Asia Broadcasting Corporation is based at 35th & 37th Floors of the World Trade Centre Colombo. It has Sri Lanka’s only state of the art studio complex purposely built in Colombo city limits with more than 100,000 sq.ft which comprises of 4 television studios as big as 100 feet in length and 80 feet in width, along with office operational floor areas.

Hiru TV is Sri Lanka’s most watched national channel comprises of the latest technologies of the television which is in par with global standards. Today the company is valued at more than USD 900 million.