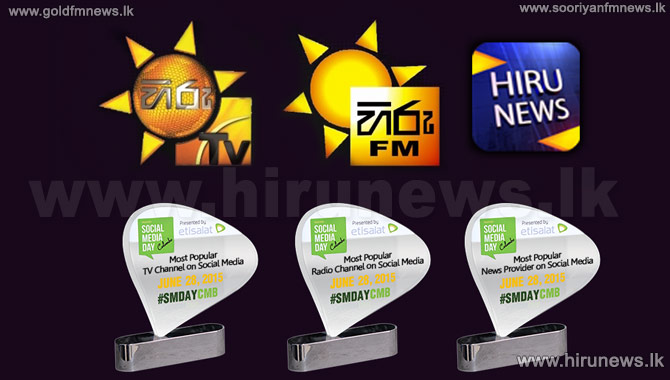 ‘Mashable’, the world’s biggest news website, that reports news about digital culture, social media and technology celebrates June 30th as the social media day every year. This time Sri Lanka too is named among the five main global celebrations due to the significant numbers of Sri Lankans connected in the Social Media Space.

This year, the fourth time 'The Social Media Day' event was hosted in Sri Lanka is presented by Etisalat in association with Neo@Ogilvy.

It is significant that the winners in this were selected by holding a pole through internet.

It was further confirmed through this that millions of people constantly use all the websites of the Asia Broadcasting Corporation including Hiru News Website run by Lotus Technologies (Private) Limited, the digital media company affiliated to the Asia Broadcasting Corporation that possesses the ownership of a number of the country’s top websites. Lotus Technologies is now Sri Lanka's number one and the largest digital media network in the country.

The prime force behind these awards that Hiru TV and Hiru FM won, is the chairman of Asia Broadcasting Corporation Mr. Rayynor Silva. Hiru TV and Hiru FM channels that began under his concept have by now brought the art of media to a new arena under his guidance. Expressing his best wishes with regards to Hiru News, Hiru FM and Hiru TV winning awards at the ceremony held in Sri Lanka in view of the world social media day Asia Broadcasting Corporation Chairman Mr. Rayynor Silva said the people of the country had repeatedly corroborated his vision of raising Sri Lanka’s Art of Media on a new path.

He said that awards like this which are presented nationally and internationally on Hiru News, Hiru Fm and Hiru TV were definitely an encouragement.